In arabic 2 means (اثنين). And above title means ( the second lesson ). Insha-allah it will be clear when we come across number systems in arabic.
Hope you are comfortable with the table we studied in first chapter. If you are not …  then please go back and revise again because insha-allah we will be putting it into practice for making simple sentences.  you should tell this without stammering.

Below are some of the relationship in arabic. Just try to match the corresponding words in arabic. Don’t worry !! answers will be below, but please try to guess it first. You should at least guess 2 correctly (mother & father  …. !!). 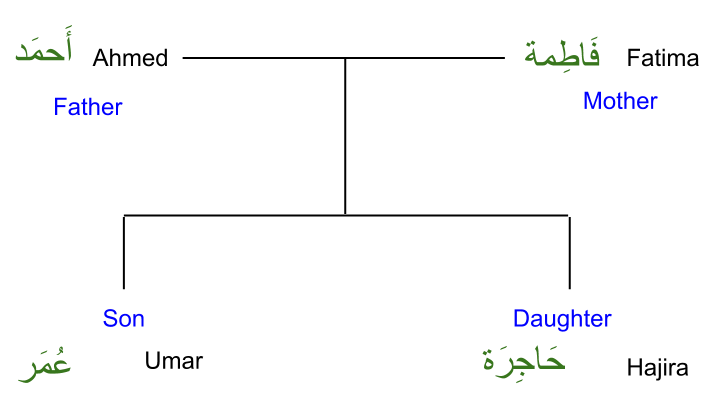 Its action time now.    Lets say Ahmed comes with his family to your house and you want to know his name and names of his family members.  So you ask him
مَن أنتَ ؟
( مَن) in arabic means Who.  So you ask him - Who r u ?  Can you guess what will be Ahmed’s reply ? recall from first lesson.  This is the reason memorisation of the table in first lesson was given most importance.    Ahmed will reply and introduce his family this way.

أنا أحمَد و هُوَ... عُمَر ...هُوَ اِبنِي
Notice how Ahmed is introducing his son. [i.e he is my son ]
If you take a noun example ( بِنْت - daughter/ girl) and add ‘i’ to the end, it refers to “my …”
like (بِنْتي - my daughter)
Now can you write / tell how ahmed will introduce his other family members ?

Now lets see how other people will introduce themselves to you and their family members. Don’t just read through below , but please try to translate the sentences which i have written in english into arabic from the whatever you have learnt above.

How do you translate ( He is muslim ):
هُو مُسْلِمٌ
Now if you want to ask the same for “they are muslim” ?   Insha-allah we see this in next chapter for making plural.
Posted by Abdullah at 07:27