السلام عليكم ورَحْمَةُ اللَّهِ وبَركاتُه ,  Most Arabic words are derived from a three-letter (trilateral) root. Like In English you can sometimes find verbs which are derived from the same word, but which have slightly different endings which affect the meaning, for example:  liquefy , liquidate , liquidise.   Arabic takes this concept of manipulation much further. The root letters of a verb can be put into a number of patterns to give different, but connected, meanings. These patterns are called FORMS.  There are 15 of them. Insha-allah in next few chapters , we will study 9-10 of them.  It’s going to be too much of grammar. Please learn and bare patience as this is going be Advanced arabic.

If the verb has 3 letters then it comes into Form-1 category.  By modifying a bit with these roots we get different forms with little different yet connected meaning.  Let’s see how.

Sometimes the meaning of this verb can be related or not directly related to Form 1. Ex. Form II may indicate causing one to do action. expressed in form I.
Example:

Important note:  When you come across verbs which has second root letter with Shadda or any other form, then you get it's 3 root letters.  and find its meaning from the dictionary which will mention its FORM specific meaning also. Example shown below.

Now for every kind of verb we had it’s conjugation right ?  Now this is new verb. For this verb we should know its Active / Passive,  past - present , imperative , Jussive, Subjunctive , prohibitive.
Before going into the conjugation , i would suggest you memorize the list from 80% quran words. It will have important format to learn and you should be able to generate the table below without hastle. example from 80% quran list for Allama.

Here is the complete conjugation table for form-2.  please read and understand how they are derived.  It will be similar to all the verbs that are in form-2.  This time you will read it vertically from right column to left column.


The verb we are studied now is tought. (علّم) and the best example would be from Quran


When Allah asked angels to tell names of everything, angels said

Very good dua for Increase in knowledge is


Form 3 : adding a long (alif)  after the first root letter


For some cases it is mutuality of action of form, example:

It (Form III) can also have meaning of doing something with someone else:

Conjugation table for Form-3.  Before that , and example from 80% quran list.

Form 4: Adding a short (alif) before the first root letter and a sukun over it.

Generally this form makes meaning of someone making himself perform some action.


The passive form of these - these three forms will be:

Exercise :
Now let’s go into the kitchen and see what is cook doing (From “mastering arabic second edition”).  For its meaning. either read the book or use a dictionary 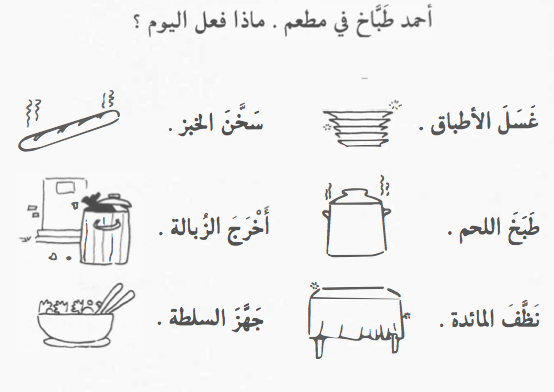